I recently spent a week in the New Caledonian capital after not having holidays for almost two years. It’s amazing to think such a beautiful tropical paradise exists only a 2 hour flight away from Australia! With crystal clear blue water, a myriad of wildlife and beautiful untouched beaches, it’s the perfect destination for a low-key holiday or long weekend. Here’s a list of all my tips, tricks and to-dos for this rather magnificent part of the world!
———————————————————————————————————————————
Places to eat

Le Terrasse (discount if you stay at the hotel): I stayed at The Hilton with a package that included breakfast daily, and I must say I really enjoyed the variety of their breakfast buffet. There was the usual hot options and cereals but also a cheese and pastry selection on which I indulged on multiple occasions! I don’t normally eat dinner at the hotels that I stay in, but their menu was intriguing and I was so tired on my first night in the country that I felt compelled to eat here because it meant not changing my clothes. I tried a mixture of both cultures, with a melt-in-your-mouth tuna carpaccio that was so good I swore as soon as I started eating it. I followed with the Foie gras on French toast with mushrooms for the French factor and while it was definitely delicious it was SO rich that I’m glad I had it second! The prawn carpaccio with mojito granita was also impressive, and the cheese platter for one is enormous if you’re game to try it. 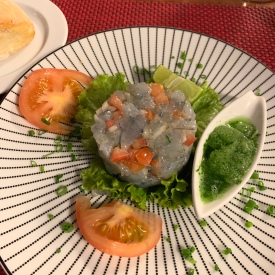 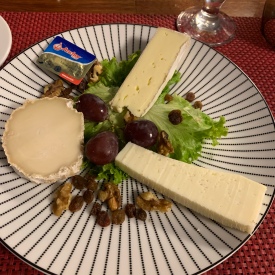 Le roof (4000-8000 XPF): Le roof is notable because you can see Le Fish swimming in Le Floor in a huge cut out section in the middle of the restaurant. The food is French Polynesian style, so flavours like mahi-mahi and foie gras can be found on the same menu. I usually eat two entrees rather than a main, and both the octopus carpaccio with sorbet and the 63*c egg with squash veloute were divine. Their raspberry Bellini was also a hit. While the restaurant is definitely on the more expensive side, I found the meals exciting and flavourful, and I left with a stomach so full after two entrees that I couldn’t eat dessert! 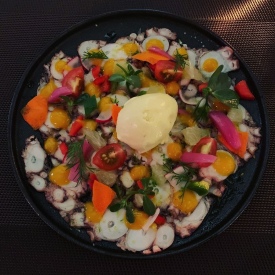 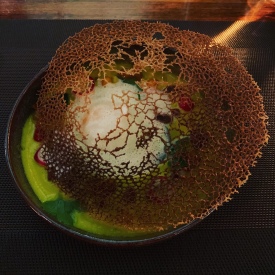 Marmite (5000XPF for three courses): I was dutifully practicing my French en route to the restaurant and then got distracted by the cute waiter on arrival and immediately forgot all of it. They have a reputation in Noumea (the restaurant, not the waiters, or maybe both I don’t know) and I can say this was definitely my favourite meal. Crab and apple gratin for entree was creamy and crunchy all in one, while the duck breast special for main was enormous and accompanied by the most wonderful medley of sauces. I washed this down with the best glass of rose I’ve had in years (a Cabernet D’Anjou) from a wine list that was far less expensive than other restaurants I’d dined in. 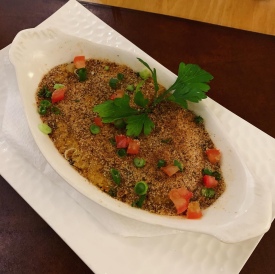 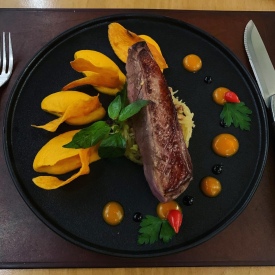 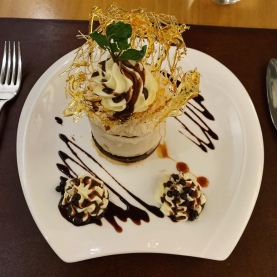 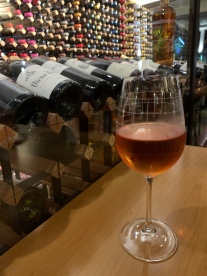 Lemon Bay Cafe: I visited here twice for their divine all day brunch menu. The wellness board is everything I love about brunch (yogurt, granola, toast and pastry, with coffee AND juice included!), while their smoothie bowl was perfect when the mercury was rising! 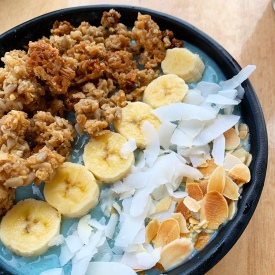 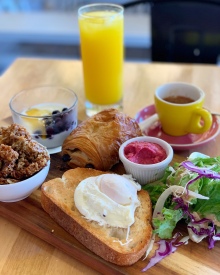 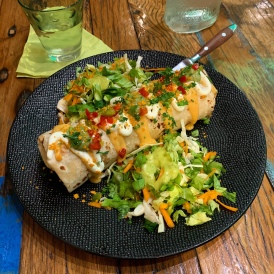 Tipico Latino (2000-4000 XPF): Hear me out on this one. It may be a Mexican restaurant in a French colony, but the place is #4 on trip advisor for noumea for a reason. Now I completely understand why – the food is less expensive than other places in Anse Vata, with enormous portions, and is totally inexplicably delicious. I don’t think I’ve had a vegetarian burrito this good in Australia so kudos to them!

Passion macaron (190-260XPF each or 980XPF for a pack of 4): another little local in Anse Vata. Their macarons were just gorgeous. For the ultimate foodie factor, try their savoury foie gras or smoked salmon macarons, otherwise there’s always the basil and strawberry, praline, yuzu, caramal, chocolate, pina colada etc etc to take your fancy.

Atelier gourmand (160-700XPF): this one was hands down my favourite bakery in Noumea. Their pastries are affordable, their lunch options plentiful and I don’t think words can accurately describe just how good their desserts are! 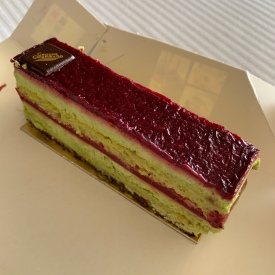 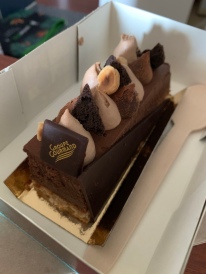 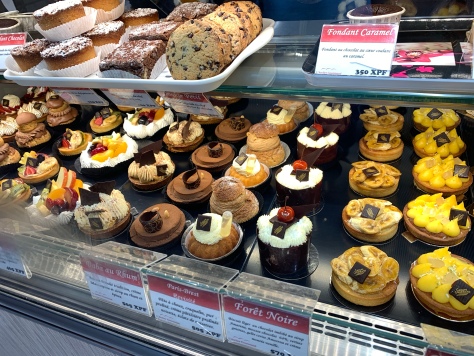 Amorino gelato (600 XPF): this is the same chain you find in Italy and France, so it’s reputable and delicious. They turn their gelato cones into beautiful little flowers, perfect for enjoying next to the beach at Lemon Bay or Anse Vata.

Aquarium: this was on my go-to list before I arrived in the country, and I can honestly say it was one of my favourite things to do! While it doesn’t beat snorkelling, you can get very close to animals that in reality you’d be keeping a distance from in the wild (sharks, rays, lion fish, snakes etc). I could sit there for hours watching the enormous reef tanks teeming with wildlife, it’s totally magical and very relaxing. 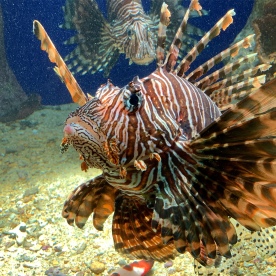 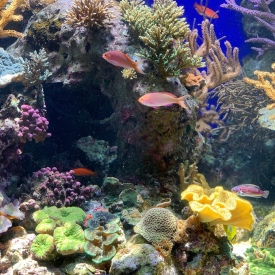 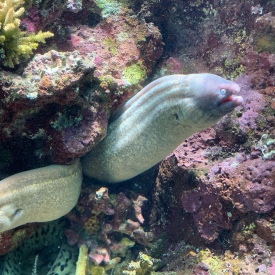 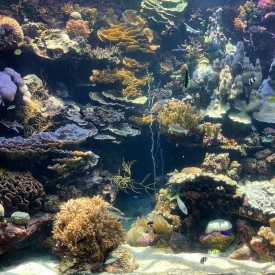 Botanical gardens: when the weather turned too windy for the beach halfway through the week, I discovered the botanical gardens. While the word “zoo” is in the title, it’s more of a bird park with the occasional lemur / monkey. That being said, it’s a great opportunity to get up close to the adorably fluffy national bird the Cagou, as well as parrots, peacocks and an inquisitive ostrich. 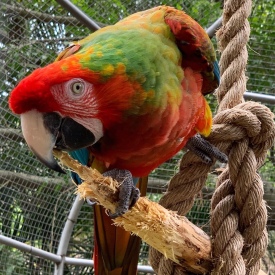 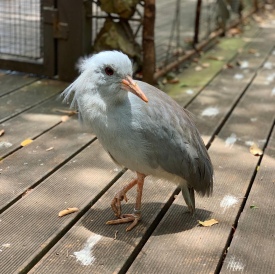 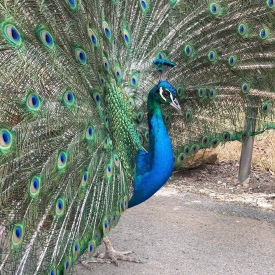 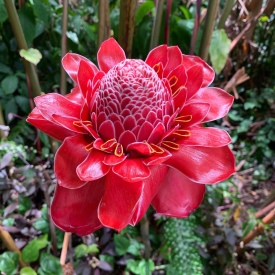 L’islot maître: each of the islands has their different appeal. I felt as though islot maître wasn’t as well set up for tourists as some of the others BUT it had an abundance of sea grass which meant swimming with turtles. Oh wow. This was enough in itself really. Grab the water taxi from Anse Vata and once you disembark, go left to the day tripper area for a free deck chair, or cross directly across the island to swim in the grass with a turtle colony. Just be mindful of the areas marked as conservation zones, don’t touch any of the wildlife and be prepared to be stung by sea lice (which really hurt if they get you on the face like me!!). The deadly neurotoxic sea snake tally here stood at 3 which was more than enough for my liking, but luckily they swam quickly in the opposite direction. 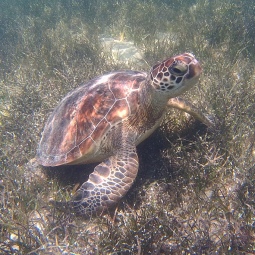 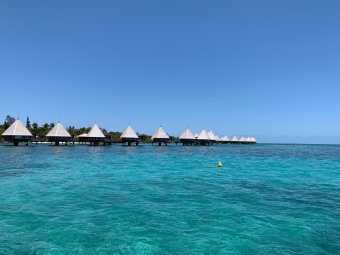 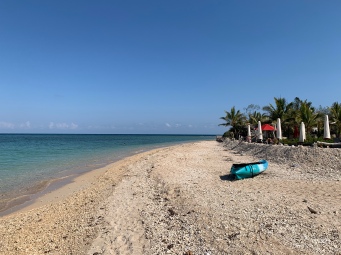 Iles aux canards: this island was certainly more touristy and crowded but you cannot look past their incredible reef. You have to hire the umbrella and deck chair set if you want to lounge in luxury (about $45 AUD for all day hire), but I honestly thought it was worth it in the name of comfort and avoiding sunburn, particularly because peak snorkeling time (i.e. high tide) was around the middle of the day which came with the most brutal UV factor. Rather than a planned tour, just grab the water taxi across from Anse Vata beach which stops at the start of the snorkel trail, where white bouys are anchored to key sites on the reef with various notable wildlife to be seen at each. The reef was extraordinary and a lot closer to shore than you’d think (only a few metres), so even less confident swimmers can enjoy. There was an abundance of tropical fish, sea cucumbers, jellyfish, moray eels and thankfully no sea snakes this time!

L’islot Amadeé: I chose to do the Mary D tour (12500 XPF) which included hotel pick up and drop off, boat transfer to the island, deck chairs and umbrellas, a seafood buffet lunch including drinks, a glass bottom boat tour of the reef, and optional lessons in coconut tree climbing, sarong tying and traditional dancing. The reef here was fantastic, and the view from the top of the Amadee lighthouse was worth the trek up the 247 stairs. The local seafood buffet lunch was delicious and not having to worry about food during the trip certainly made things easier. The reef was another opportunity to swim with turtles, many different kinds of fish, starfish etc etc. The island is known for having the most number of snakes per square metre, and I must admit once the sea snake tally hit 9 I did start to sweat a little (but again, they don’t attack unless you disturb them). 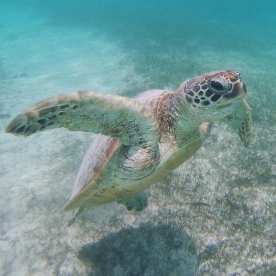 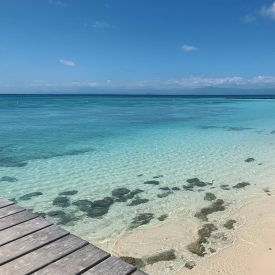 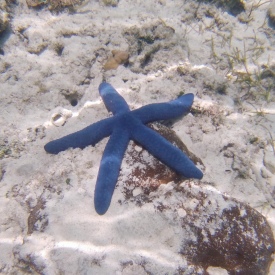 Anse Vata: my favourite beach at Noumea, mainly because it has more sand than the others (and was out the front of my hotel). The walk along the promenade is beautiful regardless of the time of day, whether you’re just soaking up that gorgeous blue clear water or watching the old Noumean men play boules on the beach front.

Coconut Square: this is the area that you’ll likely be dropped off at if you are in Noumea as part of a cruise. There are a few scattered clothing shops in the centre which are quite nice but expensive. You can also catch the number 3 bus to Ouen Tonto from Coconut Square which travels along the scenic route of Port de Moselle, Baie des Citrons and Anse Vata.

Take Australian SPF50+ sunscreen at least as the UV factor is high (and despite this I still got burnt!). Reapply regularly if you’re swimming etc and stay in the shade where you can.

I’ve been told Noumea doesn’t have malaria, but it does have the Aedes ageypti mosquito like Queensland so be aware of the theoretical risk of dengue, Zika and chikungunya. Wear Queensland strength tropical mozzie repellant and if you come home and spike a fever or develop joint pains, a rash or are otherwise sick about a week later then please see your GP ASAP. If you end up being sent to emergency, I promise I’ll be nice!

Unlike Australia, New Caledonia isn’t inhabited solely by animals destined to kill you – with the exception of the stripy highly venomous neurotoxic sea snake known as the trechot raie or krait. I preface this by noting I have a morbid fear of venomous snakes, so I wasn’t exactly impressed to find that these things inhabit many of the areas I would like to snorkel. Unlike our king browns and Taipans, these ones won’t chase you and won’t bite unless you disturb them so DO NOT TOUCH under any circumstances!

Noumeans speak French and English among  many other dialects. Try your best at both, most people I met were very accommodating in either language (particularly if you started with “je suis desole, je suis Australian….”).

The currency is French Polynesian francs XPF and while some blogs say otherwise, I didn’t find a single place on the mainland that took euros or Australian dollars. There are atms around but they can be hard to find, although I found I got a better exchange rate by withdrawing from my bank than I did with the cash I got back home, go figure! I found it easier to work in cash, as some places didn’t take card, particularly on the smaller islands. It’s well known that Noumea is expensive, particularly the food and alcohol due to the taxes so be prepared to spend. That being said, you can certainly save money if you have a hotel package that includes breakfast as I often ate enough at breakfast to see me through until dinner. Lunch is always cheaper if you plan ahead, so if you’re heading to an island, go to a local bakery to stock up on baguettes etc beforehand! Even simple things like ice cream and juice can cost between $10-$20 AUD when the exchange rate is taken into account so it’s just about being mindful.

Also I found pedestrian crossings were more of a suggestion rather than a rule, so just like in Europe, remember to make strong eye contact with the oncoming driver and watch them slow down before you step out onto the crossing!